This collection consists of several letters Martin L. Williston wrote to his sister Annie while serving with the 52nd Infantry in Louisiana. This manuscript collection consists of letters that often span several days at a time and contain an insightful representation of a Unionist soldier's views of the South, as well as the fears and horrors of the first few months of the war.

Martin L. Williston enlisted in the Union Army at the age of 19 in Northampton, Massachusetts, on 1862 September 8. Previously a student at a college in Massachusetts, he started in the 52nd Infantry as a Private but was soon promoted to First Sergeant on 1862 October 1. During his time stationed near Baton Rouge, Louisiana, he wrote many letters to his sister, Annie in Brooklyn, New York, describing his experiences during the first six or so months of the war. These letters contain an insightful representation of an educated Unionist's views of the "Rebel South," as well as the fears and horrors of war. After seeing slaves quartered at Ship Island, Williston became very passionate regarding emancipation. As a deeply spiritual young man, he often wrote of the importance of remaining pious during his wartime experiences. Participating in skirmishes such as Port Hudson, he gave an account of his first experiences of battle in one of his letters. Williston survived the following years of his enlistment and, by 1866, became the head instructor of a school for 250 African-American children in Wilmington, North Carolina. 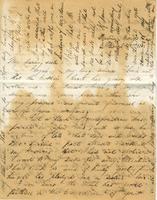