Charity Hospital produced regular reports for the state government of Louisiana titled Report(s) of the Board of Administrators of the Charity Hospital to the General Assembly of Louisiana, also known as the Charity Hospital Reports. Published from 1842 to 1974, these reports are vital to Louisiana's social and medical history and include information not widely available from the nineteenth century. The Charity Hospital Reports include public health information on morbidity and mortality (including information on the yellow fever epidemics in New Orleans), venereal disease issues, disease incidence, vital statistics, and hospital administration. The reports also have information on the governance and financing of the hospital. Medical milestones and memorials are sometimes included. The reported information varies from year to year, but generally there is a report to the legislature with a statistical report of the diseases treated in the hospital. Names of administrators, physicians, surgeons, residents, interns, and donors to the hospital are included in most reports. Most of the Charity Hospital Reports were published in English, but some early reports were also published in French. The 1853 and 1856 Reports are the only years scanned in the French version.

The Charity Hospital Reports Collection is a valuable historic tool for researchers with a wide range of interests from medical history to the importance of Charity Hospital as both a social and cultural institution in the New Orleans area. All of the reports were published as documents of the State of Louisiana and therefore are in the public domain. The John P. Isché Library at Louisiana State University Health Sciences Center in New Orleans supplemented the Rudolph Matas Library content by providing replacement copies for scanning as needed to replace damaged or missing content. The documents are available as .pdf documents with the text fully searchable. Every attempt has been made to make these documents accessible according to guidelines and standards for Section 508. 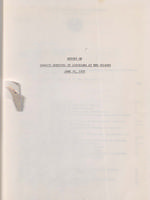