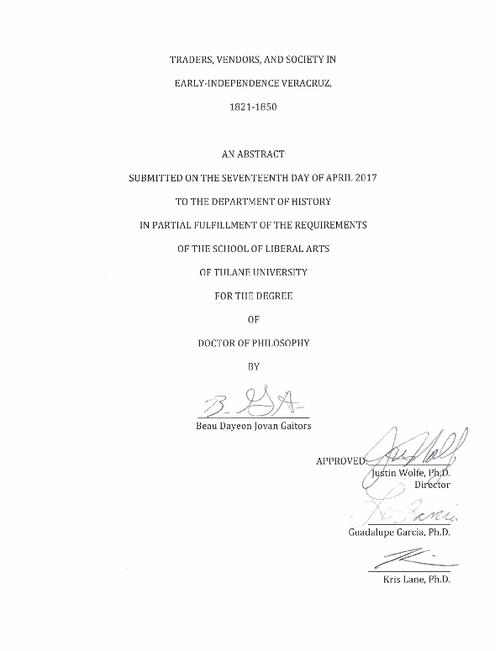 My dissertation explores the history of Veracruz during the transition to Mexican independence through a focus on traders, vendors, and mule drivers ⎯ the people who formed the chains of connection that linked this region together and connected it not only to Mexico, but also the Atlantic world. I shift the ways that scholars have traditionally looked at Veracruz, as bound by the nation-state, and investigate the position of Veracruz inward towards the nation and outward towards the Atlantic world to demonstrate Veracruz's local, regional, national, and transnational connections which are crucial to understanding the history of both Veracruz and Mexico. This dissertation explores the chaotic transition to Mexican independence through a focus on the lives and politics of early nineteenth-century plebeian traders and their networks (traders, vendors, mule drivers, and dockworkers) ⎯ a crucial, but understudied community ⎯ in the port city of Veracruz. These actors played a pivotal role in forming the chains of connection that bound the inhabitants of Veracruz together, connected Veracruz to the rest of Mexico, and fostered the ties that helped bind Veracruz to the Atlantic world. This project reveals that in connecting Mexico to the wider Atlantic world, Veracruz and its petty traders provide a transnational lens for understanding this period, one that takes seriously the flows of goods, people, and ideas, which is often overlooked by scholarship informed by regionalist and nationalist narratives. In foregrounding the nation-state, the historiography has tended to overlook Veracruz's position as a local, regional, national, and transnational center. In fact Veracruz, like other port cities, existed as an important liminal space receiving social, economic, and political influences from various places. This project begins in 1821, when the majority of Mexico addressed the building of the newly independent Mexican nation; Veracruz remained a contested space between the Spanish and Mexican militaries, demonstrating the significance of the port for Mexico and Spain. The study ends in 1850 after the introduction and use of Mexico’s first railroad, which departed from the port city of Veracruz. This railroad marked the reduction of the importance of the road system for transporting goods, led to an increase of goods transported across Mexico and exemplified Mexico’s transition from a period of the confluence of colonial and independence practices to a stage of sought after modernization.