Color footage with sound of President Gerald Ford announcing the end of U.S. involvement in Vietnam in a speech given at the gymnasium of Tulane University at 8:00 p.m. on April 23, 1975. This appears to be a videotape of a broadcast, as it contains the voice of an unknown commentator. The video opens with an unidentified announcer’s voiceover while footage is shown of President Gerald Ford, accompanied by Tulane University’s president, Herbert E. Longenecker, making his way through the crowd towards the speaker’s platform. The announcer says, “Ladies and Gentlemen, the President of the United States and Dr. Herbert E. Longenecker,” but an unidentified broadcast commentator does not hear the word ‘and’, and he believes that the announcer has mistakenly introduced Tulane’s president as the U.S. president, hears the crowd roar (for the presidents’ entrance) and, thinking that the crowd has heard what he heard, says that the announcer must have been very nervous, that everyone is getting a good laugh of that faux pas, and that it will go down as a famous slip of the tongue – when it clearly wasn’t a slip at all. President Ford mounts the speaker’s platform to standing ovation, to face a crowd of 5,500 faculty, students and alumni. Dr. Longenecker takes the podium to introduce Marilyn Thomas Bernard, Newcomb alumna and current Xavier University faculty member, who sings the National Anthem (2:05). Longenecker continues his introduction, welcoming members of the platform party and members of Congress of the United States, especially Representatives from the first, second, and third Congressional districts, each of whom is an alumnus of Tulane University {F. Edward Hébert, Lindy Boggs, and David C. Treen; Senator J. Bennett Johnston, Jr., is also a graduate}, Lt. Gov. James E. Fitzmorris, members of the consular corps, and others (3:37). Longenecker mentions Pres. Ford’s participation in the student-organized program “Direction” seven years prior, which draws applause. Pres. Ford takes the podium (6:30), waves to those behind him, and begins, address his comments to Longenecker, Tulane Student Senate President Grady S.Hurley, Johnston, Treen, Boggs, Hébert, Fitzmorris, students, faculty, alumni, and guests. He makes a joke about the difficulty of students getting to the new Superdome to see football games (7:30), mentions the Green Wave football team, obliquely refers to its rivalry with LSU (9:00), mentions his prior visit to Tulane as a “Direction ‘68” speaker, describes Tulane’s unique distinction as being the only American university to be converted from state sponsorship to private status , compliments Tulane alumni on their contributions to governmental service (10:50), gives a great description of New Orleans as “a state of mind, a melting pot representing the very, very best of America’s evolution” (11:20). He goes on to describe the victory of the Battle of New Orleans, how it restored a sense of national pride, and he uses this as a segue to announce the end of U.S. involvement in Vietnam (13:00). He describes beginning a great national reconciliation, engaging with the problems of today and of the future, and goes on to give his vision for how this program might proceed, speaking to the students by discipline and highlighting the contributions that they might make to help develop an agenda for the future (26:30). He goes on to promote a continuing commitment to peace and better relations between nations (28:55), and a halt to the spread of nuclear weapons and a reduction in strategic arms (29:15). He urges all Americans to unite in the Bicentennial year, to take responsibility for themselves and to rediscover the old virtues of self-reliance and capability of their forefathers (31:00). He ends the speech by asking that the beacon light shine forth from New Orleans and Tulane University to illuminate the future for all Americans (32:00). The President receives a standing ovation, then Dr. Longenecker thanks him, acknowledging that this was the President’s third address in New Orleans that day. Dr. Longenecker continues to say that the President is heading back to Washington immediately and that some members of the platform party are accompanying him, so he asks that everyone stay seated until the President’s party has left the area completely and Dean of Arts and Sciences Dr. Joseph E. Gordon gives them the signal that it is appropriate to leave the gymnasium. He thanks everyone for attending, and steps away from the podium. The President joins him and they walk across the platform, shaking hands with everyone else on the platform as he leaves. Other notable Tulane personnages on the speaker’s platform include incoming president Dr. F. Sheldon Hackney; Dr. John J. Walsh, Chancellor of the Medical School; Arthur Waechter, Board of Administrators; Beatrice M. Field, director of Alumni Activities; C. Murphy Moss, Shepard F. Perrin, Jr., and Gilbert H. Vorhoff, Tulane Alumni Association; Dr. Arthur L. Welden, professor of biology, and Dr. Dale U. von Rosenberg, professor of chemical engineering, representing the University Senate; Deborah A. Rosenblum, president of the Newcomb Student Senate; Mrs. Frank T. Riess, president of the Newcomb Alumnae Association; and Albert J. Wetzel, director of University Development. Full transcript of the speech, photographs, and other documents associated with this historic event are available. 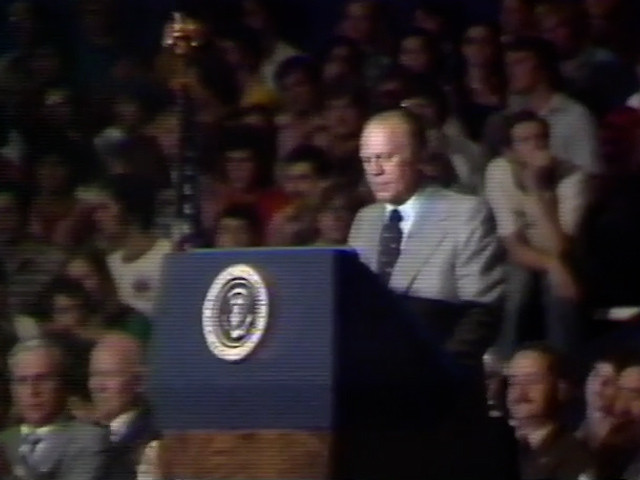 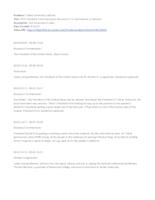 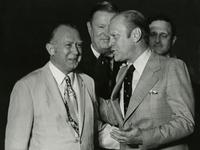 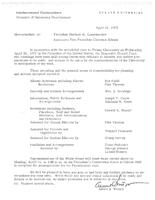