"A calculated withdrawal": postmodern american novelists, their politics, and the cold war 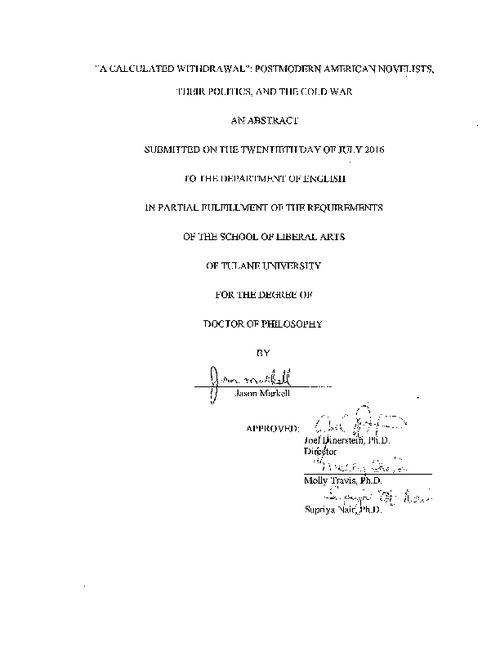 This dissertation identifies and analyzes the politics of three postmodern authors (Vladimir Nabokov, Thomas Pynchon, and Don DeLillo) by focusing mainly on their novels that are set during the Cold War. I argue that these authors’ writings, which are often read as apolitical or as cultural critiques, engage with historical and political Cold War issues, like totalitarianism, liberal anticommunism, the threat of nuclear apocalypse, and the expanded role of government agencies. Moreover, I show that although these authors cover similar political topics and often work in similar genres, like the spy thriller, their political orientations vary. What unites their disparate political views is that all three authors endorse individual liberty during the Cold War, and all provide narratives in which their protagonists withdraw from society. The overall implication, then, is that the individual can no longer affect political outcomes in an age of extreme ideologies, overwhelming technology, and seemingly allpowerful governmental agencies. My first chapter examines the politics of Vladimir Nabokov, and by using theorists, like Dominick LaCapra and Cathy Caruth, I argue that Nabokov’s postmodern novels (Bend Sinister, Pnin, and Pale Fire) explore the impact of trauma and reveal the author to be a staunch liberal anticommunist. My second chapter deals with the politics of Thomas Pynchon, and by employing theorists like Fredric Jameson, Michel de Certeau, and Michel Foucault, I argue that Pynchon’s anarchistic leanings in V. and The Crying of Lot 49 give way to a clearer anarchist outlook in “A Journey into the Mind of Watts”—that is, until Gravity’s Rainbow reflects his political despair. My third chapter examines Don DeLillo’s early novels (Americana, End Zone, Players, Running Dog) as well as his more ambitious historical works (The Names, Libra, Mao II, and Underworld), and by using theorists like Linda Hutcheon, Foucault, and Guy Debord, I argue that DeLillo’s politics reflect a type of left-leaning libertarianism. Ultimately, this dissertation serves as a corrective not only to these authors’ statements about the supposed apolitical nature of their work, but it also identifies their political philosophies, which are placed within the larger historical context of the Cold War.