National Confidence And Development In Afghanistan: Insurgency Vs. Counterinsurgency 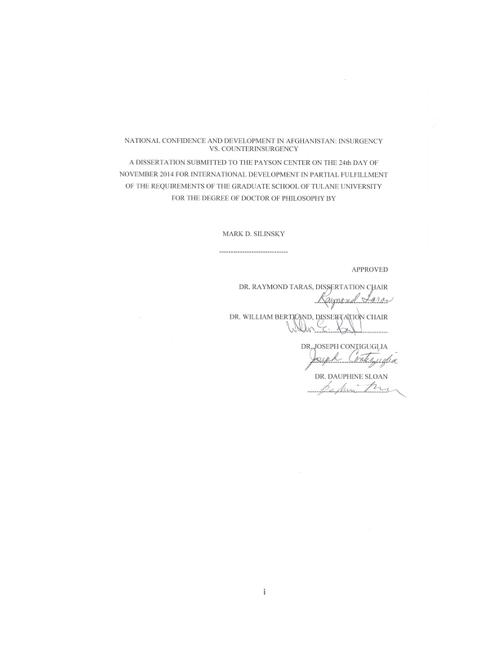 The initial hypothesis of this dissertation was that Afghan insurgents' attacks on Afghan civilians have lowered popular confidence in the Afghan government and its institutions. The goal of the insurgents has been to convince Afghans that their local, provincial, and national governments and security forces cannot protect them. Insurgents harm and kill civilians as part of their strategy of intimidation. Conversely, counterinsurgents try to convince the Afghan people that their government is responsive, that the economy is promising, that the rule of law is strong, and that Armed Forces of Afghanistan are viable. For the counterinsurgency to have been successful, the level of national confidence would need to have been high. National confidence is intangible, often fleeting, and sometimes difficult to gauge. There are standard measurements of human development, such as economic growth; longevity; access to medicine and health clinics, levels of literacy, potable water, security, and others. However, measuring confidence presents unique challenges for the researcher. The Taliban were, by far, the most powerful and largest of the insurgent groups, but there were others. The strategy of the insurgents to break confidence in the Afghan local, provincial and national governments was based on three basic principles: crippling the economy, terrorizing their domestic enemies; and destroying the will of foreign states to continue their support for Kabul. All these tactics were predicated on violence. In this dissertation, quantitative methods associated the impact of violent incidents, which were the independent variables, to various indicators of national morale, which are the dependent variables. The results confirmed some elements of the hypothesis and disproved others. Several components of national confidence declined from 2008 and 2010, but only marginally. For the scales that were measured, there was a decline of national confidence in four scales, but an increase in one scale. There were decreases in the confidence of economic prosperity in villages and neighborhoods where citizens live, and a decline in the confidence of citizens in national and provincial governments. In security, there was a very slight decline. However, there was an increase in the confidence of citizens in institutions, organizations, and officials. The findings suggest that the overarching counterinsurgency strategy of building national confidence through sustained human development was successful in the years analyzed in this dissertation. Despite a spike in insurgent attacks during 2009, national confidence in 2010 was not significantly eroded. The author of this dissertation is a military analyst for the Department of Defense. All material in this work - its observations, conclusions, recommendations, and opinions - are those of the author and his alone. No element of this dissertation, officially or unofficially, reflects the policy of the Department of Defense or any element or agency of the United States government.