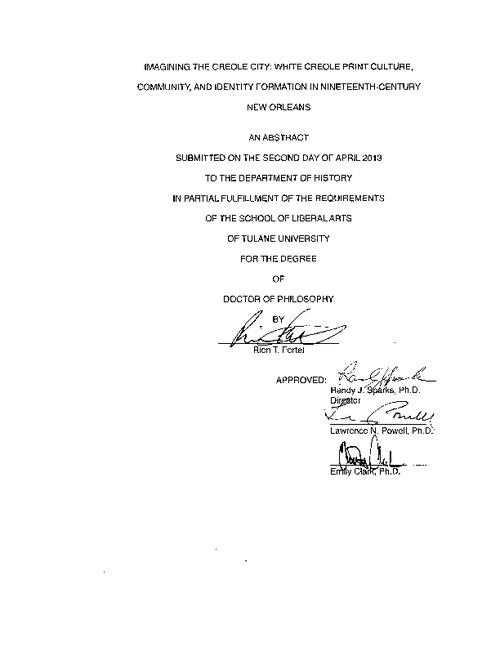 This dissertation traces the development, growth, and eventual fall of a white Creole intellectual and literary community in New Orleans, beginning in the 1820s and continuing for a century thereafter. In histories and novels, poetry and prose, the stage and the press, white Creole New Orleanians—those who traced their parentage back to the city’s colonial era—advocated both an intimate connection to France and a desire to be considered citizens of the United States of America. In print, they consciously fostered, mythologized, and promoted the idea that their very bifurcated nature made them inheritors of a singularly special place, possessors of an exceptional history, and keepers of utterly unique bloodlines. In effect, this closely-knit circle of Creole writers, like other Creole literary communities scattered across the Atlantic World, imbued the word Creole as a descriptive identity marker that symbolized social and cultural power. In postcolonial Louisiana, the authors within this white Creole literary circle used the printed word to imagine themselves a unified community of readers and writers. Together, they produced newspapers, literary journals, and art and science-based salons and clubs. Theirs was a postcolonial exercise in articulating a common identity, a push and pull for and against their French and American halves to create a creolized Creole self. Looking to their American brothers and to their French motherland, they participated in idealistic, literary, and wider cultural movements witnessed on both sides of the Atlantic Ocean. Over the course of the long-nineteenth century, these movements included romantic historicism, religious reformation, pan-linguistic nationalism, racial refashioning, a preoccupation with genealogy, and a social feminization. Though few of these white Creole authors are still read today, their fashioning of a city and state literature continues to resonate in most all literary representations of New Orleans and Louisiana. By the turn of the twentieth century, and the end of their era of prominence, the white Creoles had popularized the idea of a New Orleans centered in the city’s mythologized white, Gallic past. They had imagined the “Creole City.”