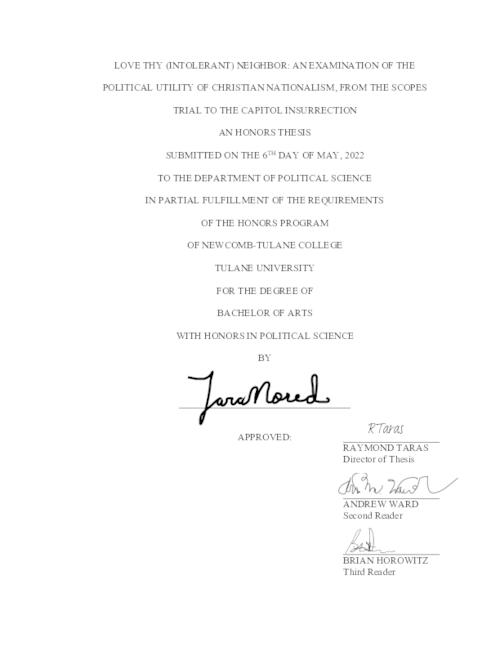 The goal of this thesis is to contextualize and understand the isolation, fear, and rage that underscores the Christian Nationalist movement in the United States. The guiding question for my research is “why have many protestants felt alienated, enraged, or fearful in recent decades, and how do these feelings contribute to a rise in nationalist violence?” To answer this question, I developed a unique definition of Christian nationalism: A political movement reliant on a set of values, beliefs, and narratives which advance white Protestant Christianity as deserving of privilege above other religions, groups, and people in the United States. Drawing on previous scholarship on Christian nationalism, I outline four key attributes of Christian nationalism. First, Christian nationalism is a political movement. It is modern and modernizing, with an emphasis on literal, selective readings of the bible. Second, this movement has the power to unite disparate groups of people through common feelings. Third, emotions are central to this movement, particularly alienation, fear, resentment, nostalgia, anxiety, and rage. Finally, Political operatives are capitalizing on these emotions to elicit political will and political action. Chapter One of the thesis begins with the Scopes Trial, tracing how particular Christians in Dayton, Tennessee were dismissed by the mainstream media. This dismissal coupled with a lack of economic and social mobility intensified their feelings of alienation, rage, and fear. Chapter Two examines how these emotions were covertly manipulated by select actors and select organizations for political ends. Identifying the political utility of rage, these political operatives acknowledged disenfranchised Christian voters in a way that felt relatable. Spurred by these actors, some Christian Nationalists have used violence as a mode of self-assertion. Chapter Three examines a few of these violent incidences, from attacks on Civil Rights activists to the Capitol Insurrection. I conclude with a discussion of the need for compassionate approaches to combatting this movement. Compassion does not ignore the nativism, homophobia, racism, or bigotry of Christian Nationalism. Rather, a compassionate solution makes true progress toward healing the rage, isolation, and fear of Christian nationalists by taking the historical context of this movement into account.